Thousands of people who live with a painful throat problem could soon be spared the frequent invasive scans – swallowing a piece of string.

The new technique, developed by doctors at Southampton University Hospital, will be offered to patients with eosinophilic esophagitis, a condition which affects around one in 1,000 people and causes severe inflammation of the food pipe, or esophagus. .

This can make eating uncomfortable, trigger nausea, and in severe cases require an emergency procedure to clear blockages.

In February, Motherwell footballer Sean Goss, 26, revealed he was suffering from the disease.

If sufferers cannot swallow, they may have to rely on meal replacements for nourishment.

The new technique, developed by doctors at Southampton University Hospital, will be offered to patients with eosinophilic esophagitis, a condition which affects around one in 1,000 people and causes severe inflammation of the food pipe, or esophagus. . 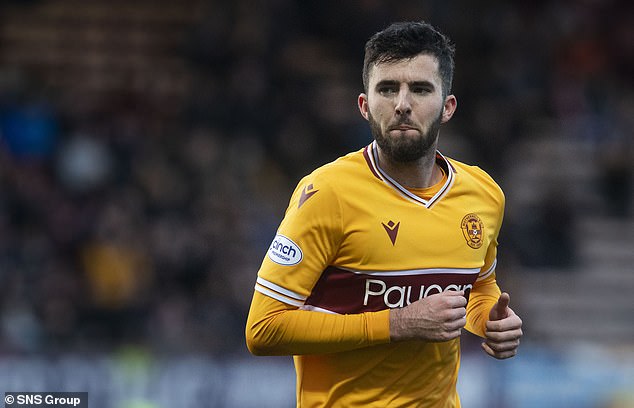 In February, Motherwell footballer Sean Goss, 26, revealed he was suffering from the disease

The disease can be treated with medication and by limiting the foods that trigger symptoms, but the only current method of monitoring is to insert a camera down your throat every two months.

This method, known as endoscopy, can be grueling but is essential, allowing doctors to see inside the esophagus and take tissue samples. If the condition progresses, scar tissue can build up, permanently narrowing the pipe and worsening symptoms.

During a 30-minute procedure, patients swallow a 0.3 mm wide string, which is rolled up into an 8 mm ball. One end is glued to the side of the cheek. They take a sip of water and the string unwinds in the stomach. After half an hour it is removed. The twine is made of rayon, a synthetic fiber often used in upholstery that is also very absorbent. It absorbs fluid in the esophagus, so instead of looking for physical damage, it allows doctors to look for microscopic inflammatory proteins.

In eosinophilic esophagitis, infection-fighting cells called eosinophils go haywire and accumulate in the esophagus. The area becomes inflamed, which makes the tube feel like it is tightening.

While many patients say an endoscopic checkup is only mildly uncomfortable, a minority find it traumatic and require sedation. This can be especially difficult for children. Dr Efrem Eren, a consultant immunologist at Southampton University Hospital who has used the technique on 1,000 cases, said: ‘Because the string is soft and elastic like food, children as young as five years old don’t have no problem swallowing it. Additionally, we have these test devices in all NHS labs, so it would be easy to deploy them on a large scale.

Why some people develop eosinophilic esophagitis has long puzzled doctors. Many experts believe this is the result of an unusually reactive immune system, as people with immune disorders such as asthma and food allergies are more likely to develop it.

Treatment includes removing common trigger foods, such as wheat and dairy products. Heartburn medications called proton pump inhibitors can also be effective, as can steroids. If left untreated, the esophagus can become so narrow that patients need to undergo therapeutic dilation – where a balloon is used to widen the tube so they can swallow.

Rarely, patients develop tears in the tissues that require emergency surgery to repair them.

Doctors in Southampton are encouraging patients to take the new test at home, to avoid trips to hospital. Dr Eren says: “Taking a home test is an easy way to make them feel comfortable that their treatment is keeping things under control – it can encourage them to stick to their treatment plans.”

Eli Rana, 13, from Southampton, has been monitored using the rope test since he was first diagnosed with eosinophilic esophagitis in June 2020. His mother, Lisa, an allergy awareness campaigner , had noticed that he had to cut fruits and vegetables into tiny pieces and drink several glasses of water with his meals just to get the food down.

To confirm his diagnosis, Eli – who has an interest in cars and photography – underwent an endoscopy and biopsy under general anesthesia. Over the next year, Southampton doctors monitored his condition using the string test as he tried to cut out different foods from his diet. Eventually, it was discovered that soy was causing eosinophils to build up in his esophagus.

His mother says, “I can’t even understand what it would be like if he couldn’t pass the string test. It doesn’t hurt at all and he can be back in school an hour later – it’s amazing. I want Eli to have as normal a life as possible. It would be terrible if he had to miss school regularly because of his health.

Why is Google Photos stealing all my online storage space? [Ask ZDNet]

Welcome to this week’s episode of Ask ZDNet, where we answer the questions that make Dear Abby’s eyes shine. In the Mail this week: Why am I suddenly running out of storage space in my Google Account? And how do I get a decent network connection in my home office when the cable modem is […]

| Posted: Thursday February 24th 2022, 9:40 AM [IST] Xiaomi is ready to launch a new smartphone in its flagship Xiaomi 12 series. Already, the company has unveiled the flagship Xiaomi 12 and 12 Pro models. One of the next models in the series is the Xiaomi 12 Lite. Although we have come across several […]

Send2Press Newswire2022-04-25 TRAVERSE CITY, Mich., April 25, 2022 (SEND2PRESS NEWSWIRE) — ViewTech Borescopes has announced that it will be returning to exhibit for the 10th time during MRO Americas Aviation Week and will be located at booth #908. Since 2012, ViewTech’s articulating video borescopes have been on display at the world’s largest aerospace MRO event […]