With the launch of Reply Game Studios soulstice getting closer and closer, we had access to the first two acts of the game.

Our progress so far has confirmed a few things. The first is that it’s a very enjoyable game, with environments rich in detail and dripping with atmosphere. The next is that it takes a lot of inspiration from the Devil May Cry book, with its journey through a ruined city divided into multiple levels, and the action largely framed by cinematic angles. And finally, it seems to be pretty good, offering a long adventure full of challenging combat, exploration, and a handful of puzzles. It’s safe to say we’re looking forward to the full release of soulstice.

If you are unfamiliar with the game, soulstice is an action-adventure title that puts you in control of a “Chimera”. These warriors consist of two souls, one inhabiting a physical body to fight, and the other bound to them as a shadow, aiding them in many ways. It is therefore essentially a deal of two for the price of one, and therefore to use the skills available to both Briar and Lute, the protagonists of soulsticeis necessary to progress.

It is established at the beginning of soulstice that Briar and Lute are somewhat outcasts in the order they belong to. But this mission to a ruined city where a great tear has appeared, causing the corruption to spread, is their chance to prove themselves. Although that doesn’t mean they’re asking for approval. The story of soulstice unfolds through dramatic cutscenes, dialogue with a mysterious benefactor, and ethereal flashbacks you occasionally encounter. There’s nothing here that surprised us, but it looks like quite an entertaining affair. 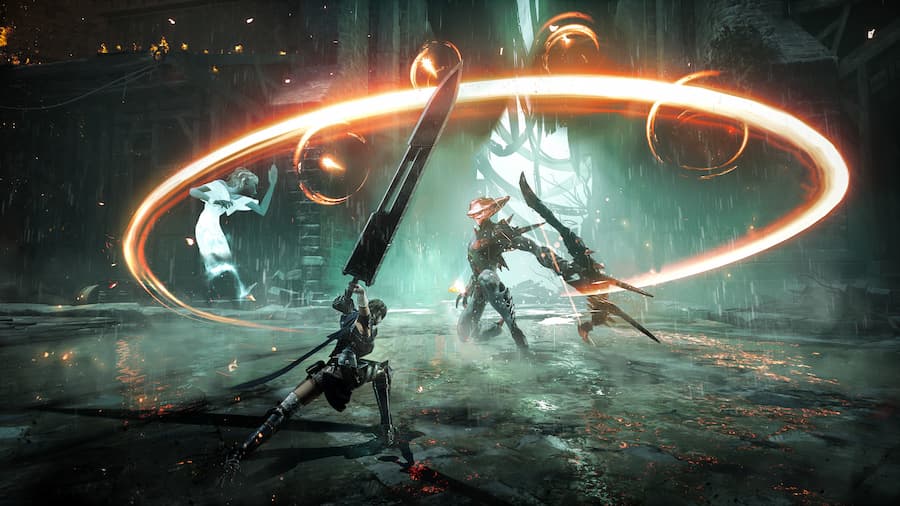 What won us over is soulsticecombination of exploration and combat. Like in games like the devil may cry and Bayonet, there’s plenty of momentum here, but there are occasional forks in the road where exploring both avenues pays off. Eagle-eyed players can also find hidden areas with goodies to collect. Along with destroyable items that drop red crystals that Briar can use to upgrade her abilities and purchase new items, there are also Motherlodes, valuable upgrades, and even Challenge Rooms to discover.

Lute’s presence also adds additional gameplay elements. She can create two fields at will – a blue one that reveals hidden objects and platforms, and a red one that turns certain crystalline growths red ripe for destruction. As you explore, you’ll need to make smart use of these two fields to gain access to new areas, and also clear them of any goodies they have. There are times when they are also needed in combat, with enemies only susceptible when within the sphere of a force field. Just be careful, because you can’t maintain a force field indefinitely.

When it comes to combat, Briar is the heavy hitter, and with her you’ll smash enemies with a giant sword that could have been taken from Cloud’s extensive collection. Along the journey, Briar will also gain additional melee weapons, and you can have one equipped alongside your sword. Ultimately, this means you have easy access to two different move sets at all times, and can mix and match attacks as you see fit. The red crystals you collect as you play also allow you to unlock new moves for each of these weapons and improve your proficiency with them.

What Briar doesn’t like too much, however, is defending against attacks. She can dodge but that’s about all. When it comes to defense, then, you have to rely on Lute. She will aid you in combat by firing magic projectiles and the like, but when an enemy is planning an attack, you can command her to counter them, giving you the upper hand. It can be hard to keep an eye out for the button prompt in the heat of battle, but get it right and you’ll freeze opponents or stop their projectiles dead in their tracks, giving you the upper hand. Keep Briar and Lute working in unison like this and you’ll even be rewarded – filling up a meter allows for powerful unit attacks.

While the fighting in soulstice doesn’t quite have the same finesse as some other greats of the genre, its quirks and unique features make it at least remarkable. In fact, the only thing that’s really pissed us off so far is the game’s camera. While camera angles are locked during exploration, in combat you have some control. And thank goodness, because the camera likes to get close and give you a suboptimal view of the battlefield. While there are indicators to let you know where enemies are around you and when they’re preparing to attack, it would be great if you could zoom the camera a bit. Sometimes you just feel a little claustrophobic.

However, after struggling for quite a few soulstice, rummaging through its nooks and crannies and slaying plenty of foul creatures along the way, it’s safe to say we can’t wait to dig deeper. Launching next month on PS5, Xbox Series X/S, and PC, it has the look and gameplay that action-adventure fans are sure to find appealing, plus some unique ideas that keep it from feeling like a rehash of what came before.

soulstice will launch on September 20 on PS5, Xbox Series X/S and PC.

THE GREAT OUTDOORS: Recover well after an indoor “adventure” |

I know this is supposed to be an outdoor chronicle, but recently I had one hell of an “adventure” indoors. The good news is that I came home from the hospital and am recovering well. It all started three weeks ago when a tickle in my throat turned into a very severe sore throat and […]

Glitch Games has opened pre-registration registration for Inconsistency, the studio’s first-person point-and-click adventure game, allowing players to get the first dibs on the title when it launches on June 30. As the first installment in the Glitch Broken Dreams collection, the game takes players on a fragmented adventure as they delve into the mind of […]