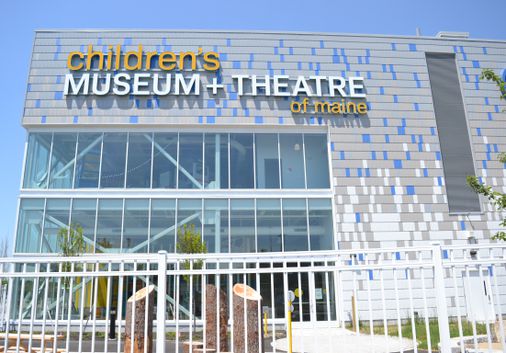 PORTLAND – It’s big and beautiful, bright and colorful. The new Children’s Museum & Theater of Maine is a sheer delight and guaranteed to put a smile on your face (and teach you a thing or two), whatever your age.

The three-story, 30,000-square-foot facility, located on the emerging Thompson’s Point waterfront in Portland, opened on June 24 and is expected to attract more than 200,000 visitors per year. More than $ 15 million was raised for the new museum (exceeding the original target of $ 14 million), which showcases the work of national exhibit designers and local artisans.

The fun begins even before opening the doors of the Museum and the Theater. There is a half-acre outdoor space that includes a large picnic area overlooking the Fore River, a maze, and the fenced-in outdoor adventure area, where you can climb, dig, and build with materials. natural. There’s also an educational garden, a collaboration with Maine Audubon featuring plants native to Maine.

Welcome! The bright, multi-colored lobby features a three-dimensional climbing structure with different levels for different ages, such as a toddler ramp and an observation tower for those who make it to the top. It also has an accessible transfer platform.

“Great attention has been paid to accessibility,” explains Julie Butcher Pezzino, Executive Director. “Our designers said we challenged them to make the museum as accessible and multigenerational as possible. We have taken it to new levels.

Additionally, on the first floor is Maddy’s Theater, a new state-of-the-art facility, now home to the country’s oldest children’s theater program. It has 89 fixed seats and additional space for those who use wheelchairs. There’s a tech booth where older kids can get involved behind the scenes in the mechanics of the production, and an observation gallery where sensitive visitors can control viewing and sound levels. The theaters are producing three shows by professional and family actors this summer through mid-October.

Role-playing takes center stage on the second floor of Our Neighborhood, where you can board the Downeaster train, listen to the pilots entering the traffic control center, glide along the pole in the fire truck. and cook and sell lobster at the lobster shack. Additionally, on the second floor is the Lunder Arts & Culture Gallery, with the master exhibit, developed in partnership with the Indigo Arts Alliance, featuring the “Beautiful Blackbird” story by Maine author Ashley Bryan, “We love the message of this beautiful folk tale, which Black is Beautiful and the importance of appreciating our differences,” says Pezzino.

Visitors are invited to “step into the book”. Large pages of fabric books are on display, with gesture animation software. In other words, wave your hands and the birds in the story interact with you. Other items include a Share Your Story kiosk, where kids are encouraged to record their own story about what makes them special, an art exhibit from children’s books, and a demonstration kitchen. “Food plays such a role in celebrating diversity and different cultures that this commercial demonstration kitchen was very important to us,” says Pezzino.

The extra large MakerSpace exhibit on the second floor encourages kids to design and create whatever comes their way. “I want to make a nesting box, a rocket, a chair, a dress… whatever it is, we’ll have animators on site to help them create it,” Pezzino explains. “It will be a very messy space to create yourself.”

The entire 10,000 square foot third floor is the museum’s science center, dedicated to STEM education. A 10-foot-tall six-sided sculpture features pneumatic balls, where visitors can learn to see and predict patterns and experience the projection. There are modular track sections for older siblings to use in designing roads, and a large, bright screen, resembling a giant Lite Bright toy, where you can create pictures by moving light tubes around. There are light tables that respond to touch, a shadow play area, and a pinhole camera that lets you see what’s going on outside the building. At the entertainment station, children (and adults!)

The one-of-a-kind periscope camera obscura was the only thing the museum moved from its old location. You can rotate and focus the camera 360 degrees for views of Portland. “We’ve had visitors who came just for that,” Pezzino says. “It’s quite rare.

“Ready for the Aquarium? Pezzino asked us for a preview visit. This area includes seven different ecological habitats, from mountains to sea, with observation and contact reservoirs filled with species native to Maine. Aquarists will be on site to introduce certain species (think turtles and frogs). Next door is the IDEXX STEM Learning Center, where kids can play the role of vets and learn about different animal species and how to keep animals healthy.

One of our favorite areas was Go With the Flow, a giant Willy Wonka-style aquatic exhibit. Put on raincoats and take one of the towels; you will get wet. You can spin and twist containers to fill and empty water, balance balls on water jets, create dams with Legos and push buttons to form stunts and shake things up. It’s a beautiful, kaleidoscopic space, with a geometric mural created by Maine artist Rachel Gloria Adams, who has exhibited her work across New England. Adams is one of the many artists from Maine who created paintings and murals displayed in the new museum.

The museum and theater are located just off I-295, near the Portland Transportation Hub, in the burgeoning community of Thompson’s Point. Here’s a suggestion: Take the Amtrak train to Portland and have a coffee at Rwanda Bean before visiting the museum. Eat lunch and drink at the Bissell Brothers Brewery or grab picnic supplies at Rosemont Market & Bakery (opening soon). And maybe head back to the Museum & Theater for a theatrical performance before boarding the train to Boston.

Diane Bair and Pamela Wright can be contacted at [email protected]

The tenuous art of “belay spelling”