The MyGekoGear Orbit 956 is a front/rear dash cam combo whose main attractions are its sleek styling, built-in GPS, and US$200 (AU$275) price tag (32GB SD card included). Alas, captures, 4K notwithstanding, are middle of the pack at best and have issues with, of all things, license plates in bright conditions.

The Orbit 956 is a rectangular affair save for its built-in static arm mount. Overall it looks sleek and modern, but be aware that there is no adjustment once this cam is glued to the windshield using its semi-permanent adhesive pad.

This is not a problem as long as you pay attention to positioning and alignment while install it. Note that the main body/arm slides out of the adhesive pad, which is in place when you take it out of the box. It looks a lot like a single unit, so don’t back down just yet. Do not ask.

The Orbit 956’s up, down and mode (menu/picture/video playback) buttons are grouped together on its right side, just above the SD card slot. The input/power/stop recording button is located on the top of the camera. On most dash cams, the input and menu buttons switch places. Combined with a lack of stock feedback, the reversal felt a little counter-intuitive in my hands. You could take it like a duck to water. I will leave it there.

Note that the SD card is abnormally deep in its slot. This prevents accidental ejection and if you have fingernails it is easy to work with. Or, like me, you may need to grab a pick or similar to help with insertion/ejection.

The mini-USB port for the auxiliary power cord is next to the input/power/record stop button on the top, and the 3.5mm jack for the rear camera is located on the mounting arm between two vents, as shown below. This is as convenient a location as I’ve seen for a camera connection. Glory. 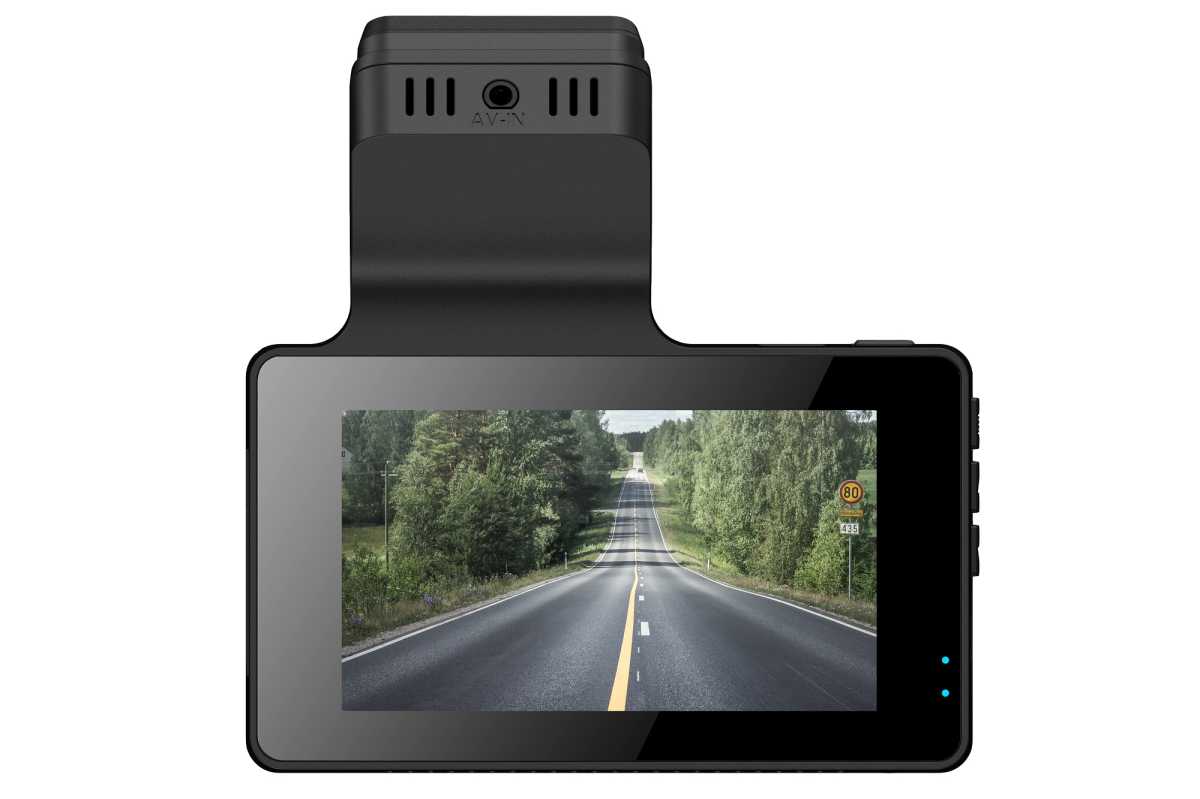 The rear of the main camera body is dominated by an easy-to-read 2.5-inch color display and also houses two status buttons (power/record). The interface is fairly easy to use, although I would say the currently selected options could be highlighted better. As it stands, the selected option is rendered as white text versus orange text when not selected. The scheme is pretty straightforward once you get used to it, but it goes against convention and doesn’t make your choice overtly obvious.

Scrolling through the four pages of options can be a little cumbersome, but the most often used functions (resolution, WDR, etc.) are on the first page, and you can scroll back from the beginning to get to the latest ones faster. pages. . 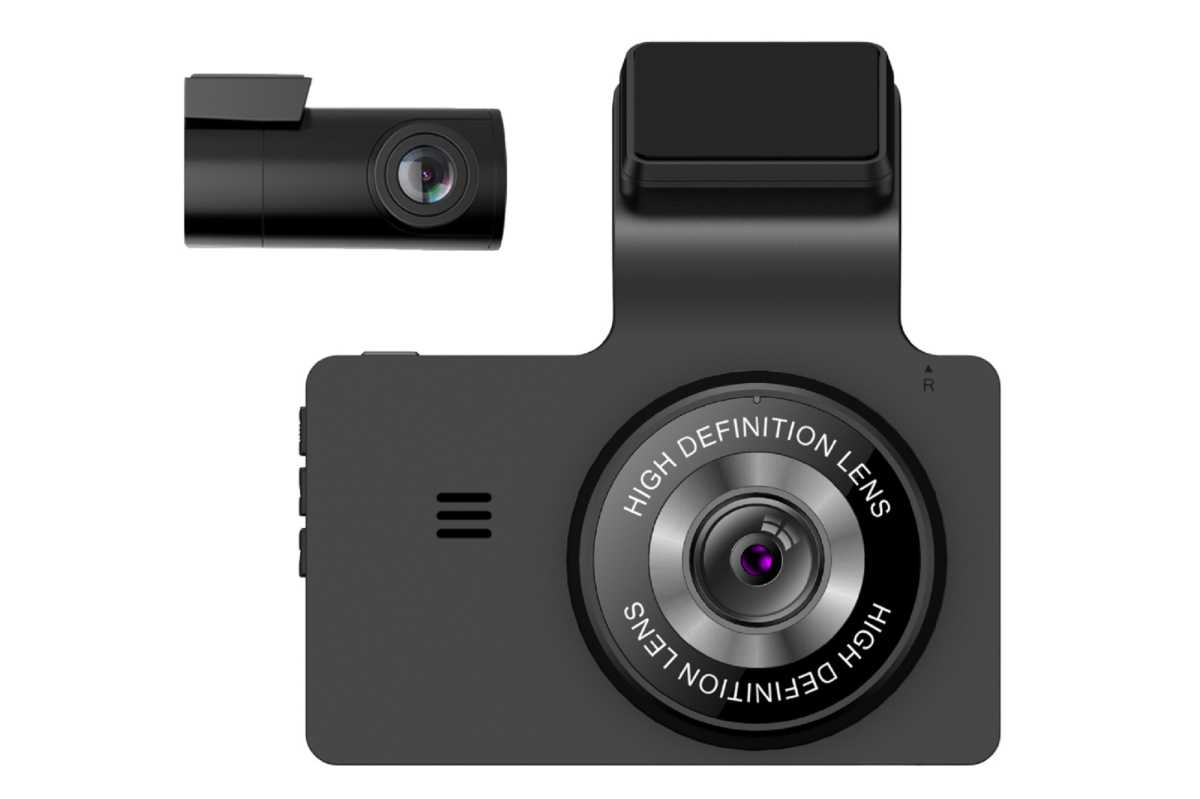 As mentioned, the Orbit 956 has built-in GPS. It doesn’t set the time automatically (one of our favorite GPS tricks), but it fires up relatively quickly. The watermark information changes from all zeros to your current coordinates in about 20 seconds. Alas, GPS information is not integrated, so you cannot track your movements using a trip viewer.

There is a 200mAh battery on board which will power the dash cam for a good 10 seconds after the 12 volt is interrupted. It’s easy enough to capture most events where your electrical system fails. The camera’s operating temperature range is 14 to 149 degrees Fahrenheit.

The Orbit 956 offers the usual dash cam perqs such as a parking mode (sleep/wake on G-sensor disturbance), time-lapse captures, WDR (Wide Dynamic Range/richer color), l automatic recording of incident videos (indicated as Emergency below). It also sports a Wi-Fi connection that can communicate with your phone and the Orbit Cam app. The application allows you to view videos, etc. but doesn’t let you adjust settings, which would be handy given the camera’s immature interface.

Note that your phone’s cellular data must be turned off.

The MyGekoGear app lets you view video captures directly from the Orbit 956 over Wi-Fi.

The Orbit 956’s front camera captures are decent, although that’s not the adjective you want to apply to a 4K UHD camera. Color is good, but details such as license plate numbers and panel lettering, while visible most of the time, can fade in bright conditions.

The daytime capture below is nice to look at, but it’s impossible to read the license plate directly ahead – the blown-out light area problem I just talked about. I tried again on a slightly cloudier day, but the problem persisted. 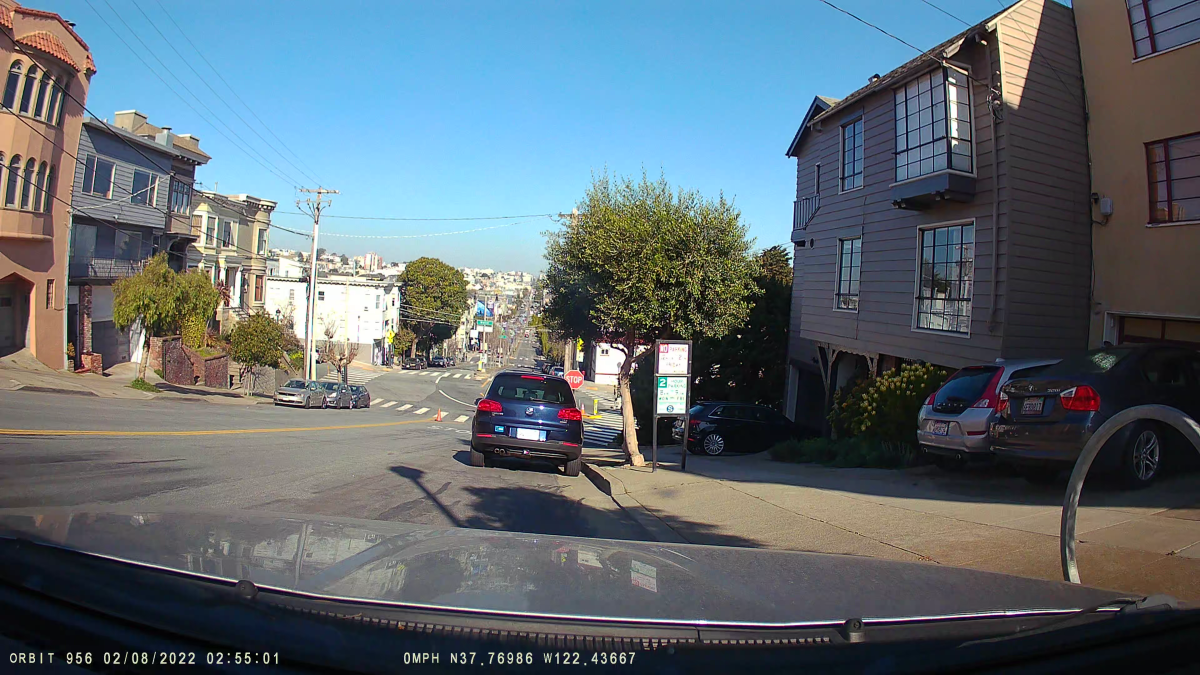 It’s a good, if not spectacular, frontal capture. Note that the details on the license plate are not very clear. In fact, it’s being nice. It is unreadable even after processing.

In the photo below you can see how the license numbers reappear when not in the center of the camera. It’s the cloudiest day I’ve mentioned, but the numbers were still unreadable until I got my nose out of the car. 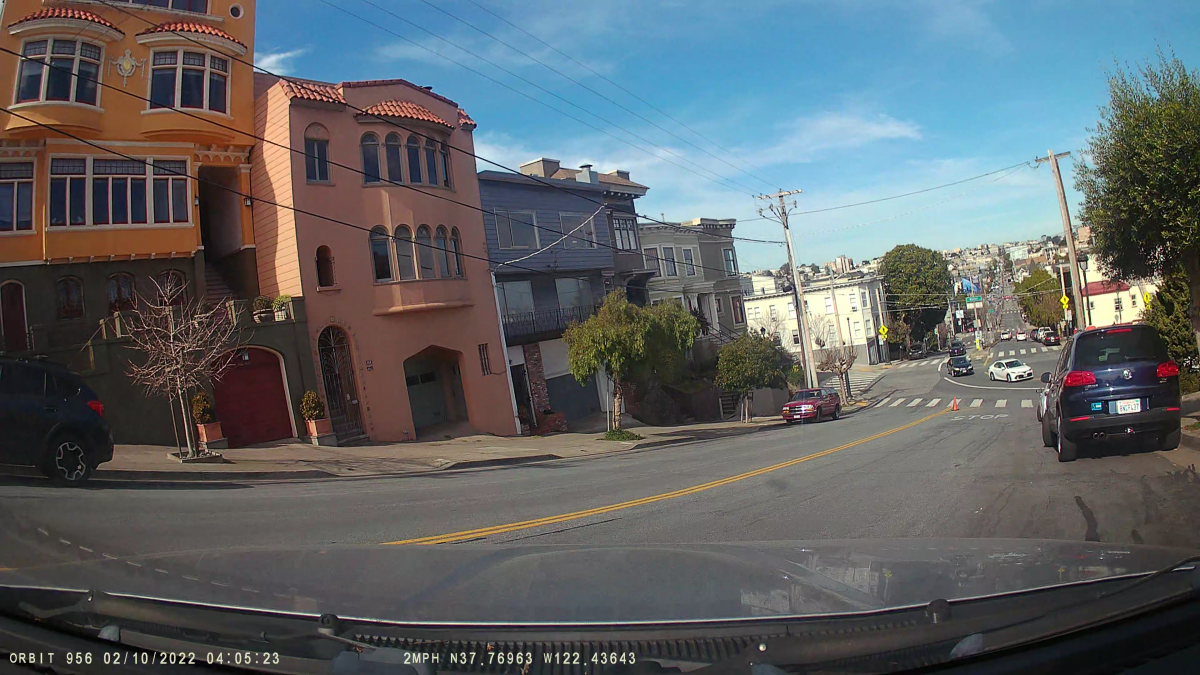 This second day shot is actually the next morning with some sun and less sun. The license plate detail didn’t show up until I pulled out of my parking space.

The rear day captures below aren’t much better. The sun just isn’t bright enough in this setting to cause the flare you see on the Prius behind me. The overall sharpness isn’t great either. 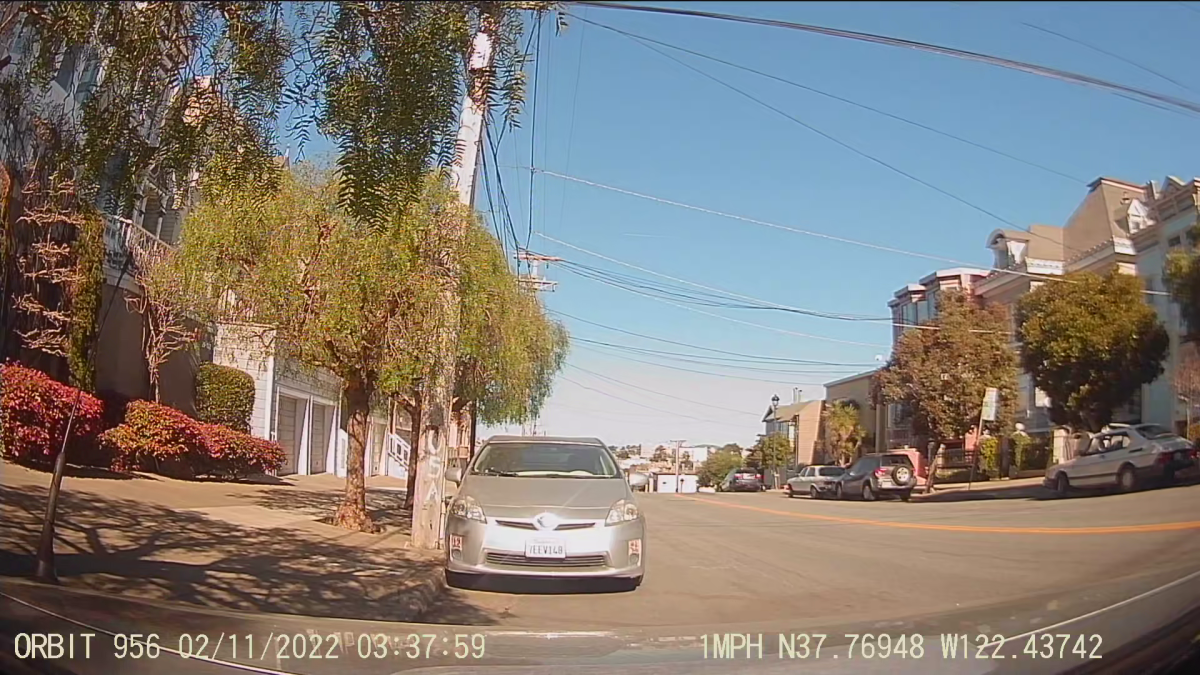 This shot with the sun behind the rear camera is better, but there’s still a tendency to lose detail in bright areas. Although rich in color, it’s not what we’d call a great capture.

The after-dark front-facing camera capture below shows good detail. Go figure. This indicates that the processing might be the problem rather than the hardware. 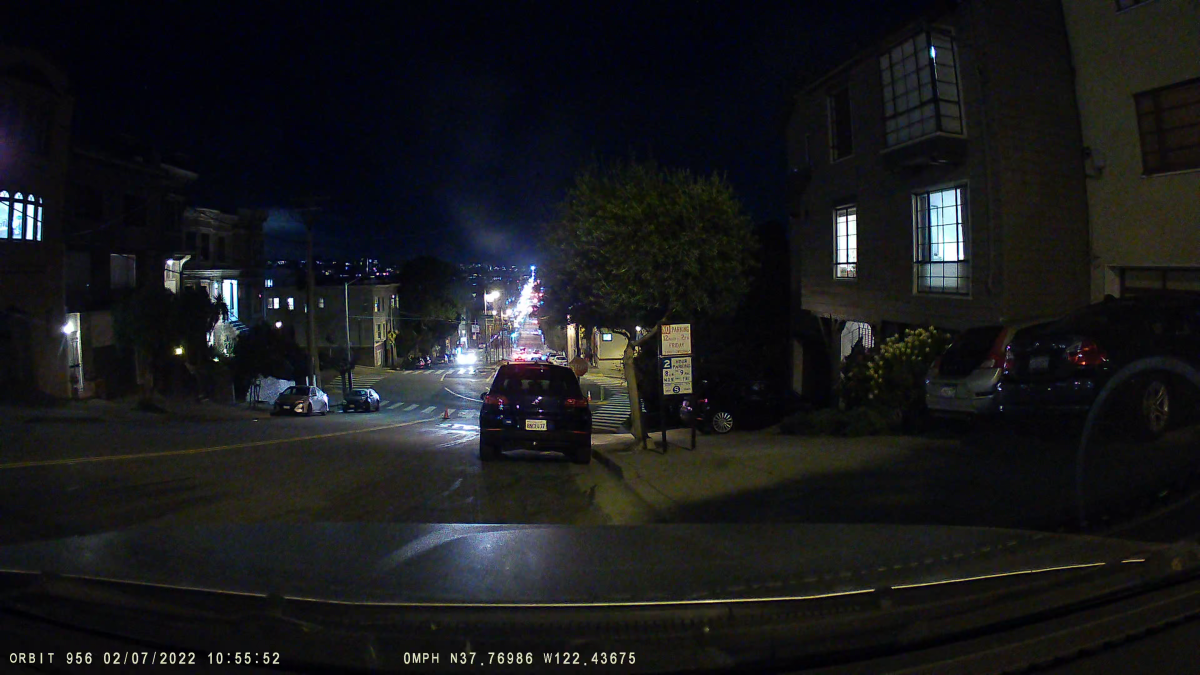 Rear night shots (below) are clear enough to identify events and people, but not details such as license plate numbers etc unless they are very close. 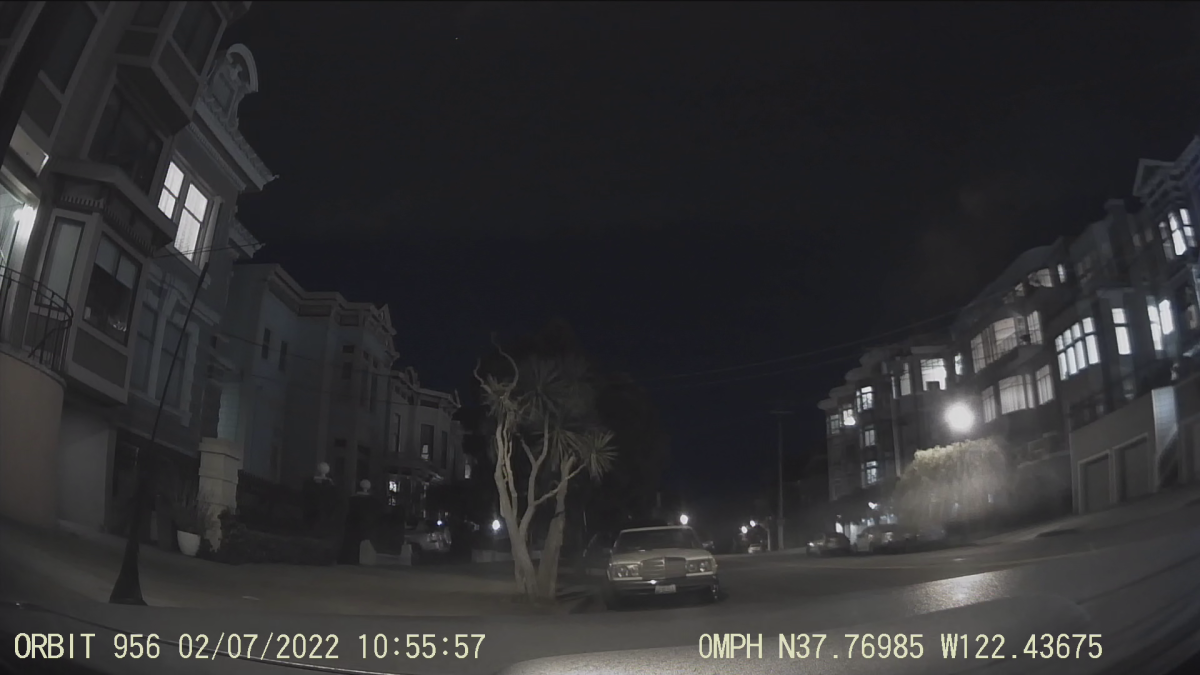 All in all, the MyGekoGear Orbit 956’s captures are below today’s average in terms of clarity, and far from what we’d expect from 4K UHD (front) or 1080P (rear). They will do the job in most conditions, but there is plenty of room for improvement.

Affordable, but intermediate at best

While $200 for a dual-channel front/rear combo dash cam with 4K UHD and GPS captures sounds like a bargain, poor capture performance undercuts the value. If your needs are minimal or you only drive at night, that’s fine. But check out the competition in our dash cam roundup and don’t buy on price alone.

The X4S is similar to the X4 but with a special optional rear camera instead of the usual rear camera. Built-in DSP on front and rear cameras made the X4S more accurate in 24-hour parking mode. With Wi-Fi function, you can check real-time driving status and play video through your mobile phone. Currently, Vantrue X4S […]

As traffic data in cities like New York attests, traffic is up, and so are car sales and prices. Unsurprisingly, accessories like radar detectors are experiencing a concomitant uptick in sales, and many, like the Escort MaxCam 360c that we have recently tested, are becoming more and more sophisticated. Simply being able to detect all […]

If an inexpensive dash cam is what you’re looking for today, Amazon might have the deal you’re looking for. Garmin’s 66W Dash Cam Setup (one of the best dash cams available) is on sale for 20% off at Amazon. On sale for $199, (its second-cheapest price ever), this nifty little dash cam setup delivers full […]