CHRISTOPHER STEVENS reviews weekend TV: The only way to get close to a wolf… is to get eaten by one

By Christopher Stevens for the Daily Mail

Wildlife presenter Ray Mears calls scenic nature documentaries “wallpaper.” If that’s his idea of ​​drab home decor, he must live in a house with a solid gold refrigerator and silk tapestries instead of rugs.

The 58-year-old survival expert told an audience at the Henley Literary Festival that he was bored by the “endless coffee table shots of gannets diving into the sea”.

Personally, I’d rather listen to Sir David Attenborough describe real wallpaper than watch Ray on one of his nature hikes.

It’s nonsense to suggest that the spectacular ultra-high definition video footage of Frozen Planet II (BBC1) is just pretty pictures. The photography is so vivid and the filming techniques are so sophisticated that each segment reveals new behaviors – animal secrets that naturalists might never discover by looking through binoculars in the wild, Ray Mears style.

Wildlife presenter Ray Mears calls scenic nature documentaries “wallpaper.” If that’s his idea of ​​dull home decor, he should live in a house with a solid gold refrigerator and silk tapestries underfoot instead of rugs.

Only a combination of ground camera crews and zoom lenses suspended from helicopters could track a grizzly bear hunting caribou across the Russian tundra, as we saw in a dramatic and brutal sequence.

The herd of caribou struggled to cross a fast-flowing river before the bear arrived to pick up an exhausted young. There’s nothing cuddly about a hungry Big Ted – the murder was merciless. If Ray Mears thinks it’s wallpaper, I don’t want him decorating my guest room.

The drama of a pack of wolves dispatching a herd of bison in a panic and working as a team to bring one down was equally compelling, and even bloodier.

Video footage is now so detailed we could see the blood on individual hairs around a wolf’s muzzle as she howled to summon the rest of her pack to the feast, in the vastness of Wood Buffalo National Park in Canada . 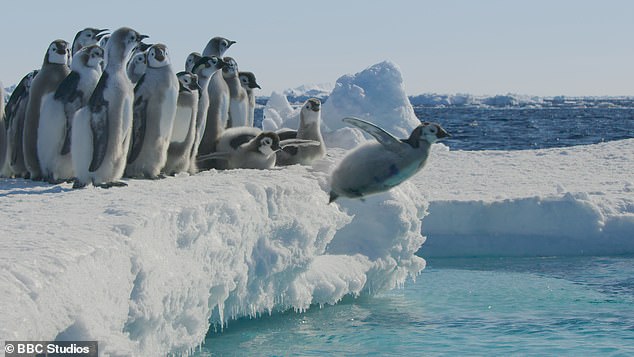 We’re the first generation of viewers to have such a close experience of wolves hunting and feeding in the icy wilderness – unless you count a few unlucky Klondike gold diggers who got even closer, when they were eaten .

Other wonders included footage from motion-sensitive camera traps in the Siberian forest, showing Amur tigers and leopards. By overlapping the films, Frozen Planet II was able to prove for the first time that these big cats, both close to extinction, walk the same paths. . . even seeming to walk in each other’s paw prints.

None of this could be seen by a television presenter crouching in a hiding place. It takes considerable effort to bring together dozens of the world’s most experienced wildlife filmmakers and send them on missions that can last for years.

Of course, many of the photos are also surprisingly beautiful. This is because the most remote parts of the world still are. We should be grateful to see them. How someone who professes to love nature can find boredom is beyond me.

The teens aboard the gargantuan cruise ship Sacramentum are heading to remote locations in Wreck (BBC3), though many of them won’t live to bring back photos. This camp horror thriller is a little confused as to its identity. Mostly it wants to be a soap mystery, with lots of parties and romances among the young crew.

Every once in a while it becomes a fluffier Blair Witch project, with a serial killer in a disguised duck costume stalking the cabins.

And at odd moments it becomes supernatural, as the ghost of drowned artist Pippa (Jodie Tyack) materializes to watch her brother Jamie (Oscar Kennedy) as he tries to uncover the truth behind her death.

The result is a tangle of comedy, hugs and gore. A second series is already in production, so maybe it will improve.

Sweet success of the weekend: Jo Brand made a point of pronouncing Fruit Pastille to rhyme with Bastille, in The Secret World Of. . . Candy (C4). Everyone else, even the scientist who tested the recipe, said “pastel”. Maybe Jo is more of a Jelly Tots woman.

Are online courses worth taking? This is how the students feel. – The mail