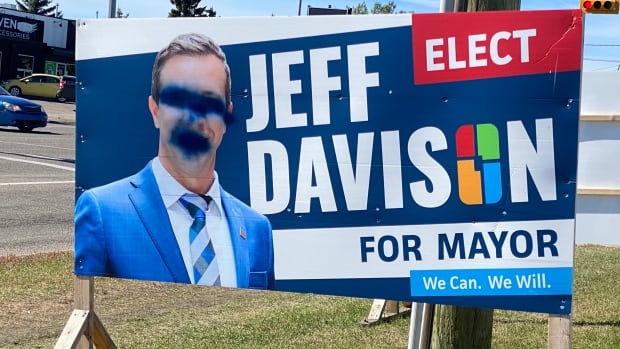 A Calgary city councilor said his office was vandalized following remarks he made to council.

Jeff Davison – who represents Ward 6 but is running to be Calgary’s next mayor – told council this week his six-year-old daughter’s kidney surgery was canceled after Alberta Children’s Hospital shut down 75 percent surgeries to cope with the influx of COVID-19 patients into the province.

Davison said companies wanted a mandatory vaccination passport like the one introduced by the city on Wednesday.

“For anyone who thinks this is a joke, that we should continue not to think about the results, that our hospital system can handle it, wake up,” he said.

“We let false narratives and misinformation fly like it’s the gospel. I’m done with this.”

He said on Friday his campaign office had been vandalized with spray paint and some of his posters had been cut up.

“It’s the usual electoral stuff, but I think it’s magnified by some of the concerns about and around COVID-19,” he said.

In what looks like a coordinated attack, my office and signs across town were vandalized. It comes right after I voted to protect the health and economy of Calgarians, a vote only Farkas opposed. Calgarians won’t be intimidated by this. #yyccc #Calgary pic.twitter.com/jwJELIoKa1

He says he has also received hate online, some of which he says borders on threats.

This is not the first time during the city’s municipal elections that signs have been vandalized or missing. More than 160 signs for online events organized by the Jyoti Gondek Town Hall campaign disappeared from the streets of wards 13 and 14 in June.

Davison says he will have more security cameras in the future and has reported the vandalism to Calgary Police.